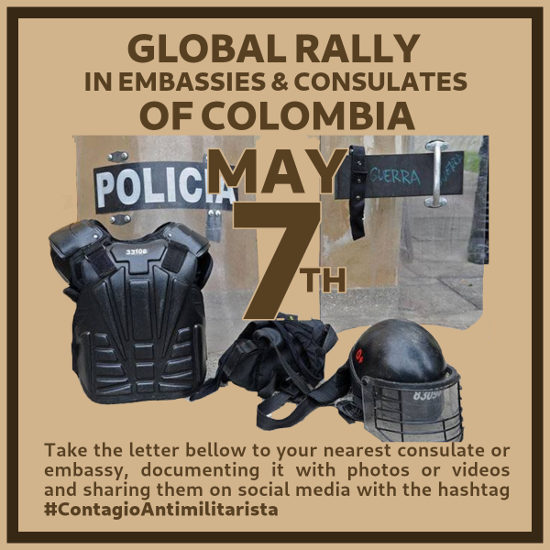 Declaration of Support and Solidarity with the People of Colombia

In regards to the popular movement and the permanent situation of the Colombian people, we, the undersigned organizations and individuals, declare the following:

1.- Colombia continues to experience great social upheavals. Today is in the midst of social mobilizations and a National Strike in opposition to the measures and bills (Tax Reform, Health Reform, Pension Reform and Labor Reform) that the government of President Ivan Duque wants to impose on the Colombian people and that have been rejected by the entire population as unjust and illegitimate.

2 - The force of truth and the DECISION OF THE PEOPLE have forced the government to withdraw its Tax Reform . However, although this is an achievement of the mobilizations, the measures adopted by the State in this crisis have not been sufficient, nor have they resolved the demands of the population. Unfortunately, the government continues to favor the privileges of AN exclusive elite, as well as the interests of transnational AND extractivist corporations, and the neoliberal system, to the detriment of the GENERAL population.

3 - In this context of social mobilization, crimes against humanity against the population continue: assassinations, arbitrary detentions, forced disappearance of persons, sexual violence, death threats, harassment and persecution, in addition to the previous crimes against social leaders, forced displacement of unarmed civilian populations, especially peasants, indigenous and Afro-descendants, which have been constant since the signing of the Peace Accords.

4 - We reject state violence against the Colombian population, as well as the actions of paramilitary groups and mercenaries, which the world has learned about through videos and denunciations. We denounce the training, assistance and weapons that the Colombian Security Forces have received from the government of the United States which, which HAS only reinforced the continuous violations of human rights.

5 - We welcome the declarations of the United Nations and the European Union rejecting police abuses and calling for a constructive and inclusive dialogue; we call on the countries of the world and international human rights organizations to act immediately to pressure and demand that the Colombian government put an end to human rights violations and repression against the population.

6 - We call on the government of President Iván Duque to stop police and military violence and to adopt political, economic and social measures that respond to the needs of its people in an immediate and consensual manner with democratic social and political forces.

7- At this crucial moment for the people of Colombia, we join the call of the prophet Leonardo Boff, who calls to create "together a broad political front in defense of democracy and social rights", made up of "all political, ideological and spiritual tendencies, centered around values and capable of getting us out of the present crisis".

STOP the repression against Colombian People