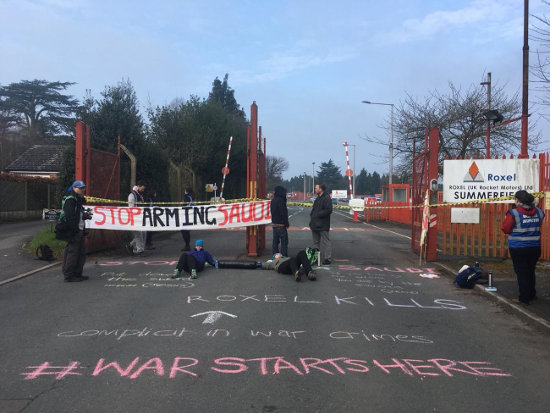 On Monday 9th April 'The People's Weapons Inspectors' blocked the gates of arms manufacturer Roxel in the UK, and attempted to inspect the site. The inspectors believe that the site is supplying weapons components that could be used by the Saudi Arabian military to commit war crimes against the people of Yemen, in particular the propulsion systems for Brimstone air-to-surface missiles . The People's Weapons Inspectors decided that they had to act when on the 12th March 2018 an order in progress for one thousand Brimstone missiles for Tornado jets appeared on the SIPRI* Arms Transfer Database .

At around 7:30am the activists parked outside the Roxel factory in Worcestershire and blocked the gates with lock-on tubes. Others walked through an open gate onto the site, demanding that they be allowed access to inspect. They unfurled banners reading "Site closed for weapons inspection" and "Roxel: stop arming Saudi", and called on the government to stop arming Saudi Arabia.

The inspectors also delivered a bundle of evidence of Roxel's alleged weapons deal and of Saudi war crimes against the people of Yemen to a senior member of staff, and explained why they had chosen to take action at the site in the way they did.

Civil war has been raging in Yemen - one of the world's poorest countries - for over three years. As of October 2017, hospitals in Yemen reported almost 9000 casualties and over 50,000 injuries. The UN says that more than 60% of civilian deaths have been the result of air strikes led by the Royal Saudi Air Force. The impacts of the conflict have been catastrophic. Yemen is experiencing the world's largest cholera outbreak. About 22 million people - 75% of the population - are in need of humanitarian assistance. The UN calls the situation the world's worst man-made humanitarian disaster.

Nicholas Cooper, said: "Roxel has serious questions to answer. It produces key technology in Brimstone missiles, and it looks like there was a large transfer of these missiles to the Saudi regime last year. These missiles could be getting used right now in war crimes. We won't be leaving the site today until we have spoken to the people in charge and been given answers.