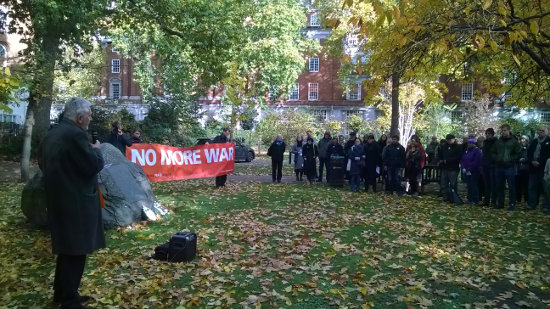 White poppy wearers have held an Alternative Remembrance Sunday Ceremony only a short walk from the official ceremony at the Cenotaph.

Laying a wreath of white poppies to remember all victims of war, they heard first-hand accounts of people in areas currently affected by war and military occupation, including Yemen and Palestine.

The event, organised by the Peace Pledge Union (PPU), took place at 12.00 noon in Tavistock Square, London WC1. Those present included people of varying backgrounds, ages and beliefs, including former members of the UK armed forces.

Speakers included PPU member Sam Walton, who was recently found Not Guilty of criminal damage after attempting to disarm warplanes bound for Saudi use in Yemen. Sam brought a message from people affectedby war in Yemen, thanking those present for remembering them and campaigning against arms sales.

Sam pointed out that even onRemembrance Sunday, as Theresa May talks of remembering the dead, Yemeni civilians are likely to be killed by Saudi forces with UK-made weapons.

Other contributors included Chloe Skinner, who has recently worked with Christian Peacemaker Teams to support human rights and nonviolence in Hebron in Palestine. Several of those present were moved to tears as Chloe named people whose deaths she had witnessed in Hebron, and encouraged remembrance for Palestinian and Israeli victims of war.

Chloe Skinner began by remembering Hadeel Hashlamoon, an 18-year-old Palestinian woman shot by Israeli troops in 2015 in Hebron, when Chloe was living there. She said:

"Behind every death, is a story of life, hidden in the militarist narratives such as those that describe Hadeel's death as 'the neutralisation of a threat'... Those teens who shot her of course had stories, interests, childhoods, families, and doubtless a history of indoctrination into separation, fear and control. And so, I want also name here the loss precipitated in the act of killing. As one Israeli soldier explained to me, it was when he killed, that he felt a part of his soul die."

After the brief speeches, those present observed two minutes' silence for all victims of war before laying the PPU's wreath of white poppies. Other individuals and families then laid their own wreaths and flowers.

Closing the ceremony, the PPU's Peter Glasgow recalled the women who had founded white poppies in 1933, following their experience of losing loved ones in the first world war. Peter spoke of "the true voice of remembrance", which does not involve "the trappings of militarism".

Other alternative Remembrance events have taken place around the UK, many of them organised by local peace groups or faith communities and often involving white poppies.